Answer Africa is a 501(c)(3) Non-Profit humanitarian organization founded in 2006 with the original commitment to provide Africa with critical health interventions and dedicated to the eradication of Malaria.

Answer Africa was co-founded by the late Dr. Makena Marangu and her husband, Craig Elliott Hacche. Makena Marangu, M.D., a Kenyan by birth, was a tireless Philanthropist whose efforts have healed and saved thousands of lives in her native country.

Answer Africa’s original mission centered on their “Nets for Life” Program. This program, which focused on fighting Malaria through the distribution of insecticide treated mosquito nets, one community at a time. Dr. Makena Marangu was from Kenya and had witnessed Malaria’s terrible effects. Her background and personal relationships enabled Answer Africa to develop an infrastructure that insured the cost-effective delivery of mosquito nets even to the most remote, hard-to-reach rural areas.

Many missions have been accomplished and thousands (250K+) of mosquito nets, medical supplies and other life-saving or life-changing equipment and other items have been donated over the years. We are so proud of the enormous impact Answer Africa has had in Kenya because of the support, industry and donations from amazing friends and volunteers worldwide.

Jean Ann Makena Marangu, MD, passed into the arms of the Lord on September 20, 2015 after battling Stage IV Metastatic Breast Cancer since 2006, and after tireless effort throughout her adult life to help, aid, assist, heal, save and love the people of her native country.

The Makena Marangu Memorial Maternity Center will serve and provide state-of-the-art medical care and facilities to the people and families in the surrounding areas of Eldoret, Kenya, an area of approximately 10 million people.

“If I speak in the tongues of men and of angels, but have not love, I am only a resounding gong or a clanging cymbal”.
~1 Corinthians 13:1

Renowned physician and surgeon, J.A. Makena Marangu, M.D. was on the cutting-edge of Age Management medicine long before the topic gained popularity and is was considered one of the foremost authorities in the field particularly in the area of Bio-Identical Hormone Replacement. Dr. Marangu believed in the whole body approach to age management – that in order to attain a youthful appearance, one must also attain good health. She was dedicated to educating the public about the latest advances in cosmetic procedures, healthcare, nutrition, wellness, and Bio-Identical Hormone Replacement Therapy.

In 1996, Dr. Marangu started in private practice in San Juan Capistrano, California where she was dedicated to educating her patients in Age Management, Bio-Identical Hormone Replacement Therapy, wellness, nutrition, and cosmetic procedures. Dr. Marangu’s extensive education and subsequent cosmetic surgery practice piqued her interest in Age Management Medicine. Her expertise was not limited to medical procedures, as it also included the roles that nutrition and lifestyle play in the process. In response to her patients’ needs for scientifically based skin care, Dr. Marangu founded MakenaWerks in 1999. She solicited the assistance of a leading dermatologist to devise skin care formulations that are the latest in cosmeceutical products.

A well-known philanthropist, Dr. Marangu was president and cofounder, along with famed anthropologist, Dr. Richard Leakey, of SADIA, an organization dedicated to addressing the needs of children dying each day from untreated surgical conditions such as appendicitis, burns, and traumatic injury caused by the overwhelming void of neurosurgeons, pediatric and plastic surgeons in Sub-Saharan Africa. Dr. Marangu is credited with having achieved the impossible for African children by her gathering together physicians and laypersons to give surgical training and on-site care.

In 1993 Dr. Marangu received the F. Edward Johnson Award for Outstanding Achievement in Service to Children by the Advisory Council of the African Development Foundation and the National Museum of African Art, a division of the Smithsonian Institution, Washington, D.C. The award was presented to Dr. Marangu by Senator Claiborne Pell on behalf of First Lady Hillary Rodham Clinton.

Dr. Marangu is the stimulus behind and co-founder of ANSWER AFRICA.

Dr. Marangu co-authored the book Face to Face and was a frequent guest on Christian radio and television.

In Dr. Makena’s final days, she was fed through a feeding tube, and was intubated with a breathing tube, attached to a ventilator, unable to speak, and only able to communicate via written word. In between the blur of Morphine for pain, Fentanyl for the agitation caused by oxygen starvation, and Propofol for when they had to knock her out, it was in that foggy state that Makena would assemble a room of 11 Mayo Clinic MD’s, Oncologists, ENTs and Radiologists, and bring them all to tears…as we continued to fight for a tracheotomy, more chemotherapy, and more radiation, Makena would clearly write 1 Corinthians 13:1 on her communication pad.

“If I speak in the tongues of men and of angels, but have not love, I am only a resounding gong or a clanging cymbal” ~1 Corinthians 13:1. 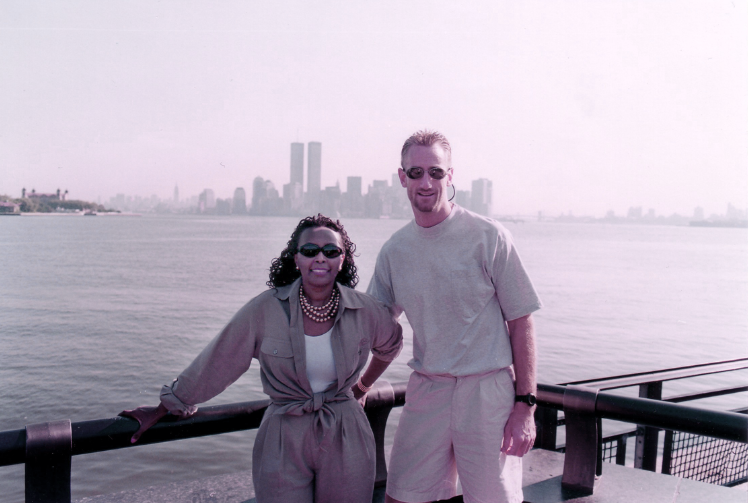 Craig Hacche was born in California, served seven years in the United States Marine Corps and graduated with a Bachelor’s Degree in Electrical Engineering from UCLA in 1987.

As Craig Hacche traveled to Kenya with his wife, Dr. Makena Marangu, he was amazed by the beauty of the country and the grace of its people. And was troubled by their tremendous struggle against poverty and disease – especially Malaria.

Craig Hacche and his wife, Dr. Makena Marangu, chose not to stand idle. In 2006, they founded Answer Africa with one focus: to make malaria a thing of the past, “Committed To Making Malaria History”. They have been doing it one community at a time – in one year alone reducing the incidence of Malaria by almost 140,000 cases.

These efforts earned Craig recognition by his employer, Rockwell Automation, Inc., as their “Good Citizen of the Year” in 2009.

…and the History of Answer Africa

“While people appreciated medicine, they were absolutely desperate for mosquito netting,” says Craig. “Mothers knew that the nets could spare their children and their families from malaria.”

Inspired, Craig and his wife, Dr. Makena, researched malaria to learn more about its devastating effects: namely that 3,000 children die of malaria each day in Africa – this is one child every 30 seconds and more than one million children every year.

Craig and his wife decided to focus on the mosquito nets and made several trips to Kenya to establish a sustainable and cost-effective net distribution program to the most remote areas. Their mission was focused in the Meru Central District of Kenya, four hours north of Nairobi.

In addition to delivering medications, wheelchairs, and supplies valued at over US $1Million, Answer Africa has delivered over 250,000 insecticide treated mosquito nets.

In 2008, the mosquito net distribution program devised and implemented by Answer Africa, Dr. Makena, and Craig had reduced the number of people infected with malaria in Kenya by 138,101, (2008 vs. 2007), according to statistics provided by the Kenyan Ministry of Health-Meru Central District.

Craig’s efforts have spanned two continents, from Kenya to Southern California, where he mobilized his own community. He has organized local outreach to educate people about malaria and the effectiveness of insecticide treated mosquito nets, as well as fundraisers to help purchase these nets. He has given his colleagues and friends the opportunity to visit Kenya on humanitarian missions to see the problem and the solution firsthand.

Working with the Kenyan Ministry of Health-Meru Central District as well as community elders and leaders, Craig and his wife, Dr. Makena, established a net delivery and education process to insure that the nets are received and properly used.

To accomplish his goals, Craig traveled thousands of miles by plane, hundreds of miles of rough, dirt roads in extreme temperatures, overcame language barriers and faithfully slept beneath mosquito netting himself while working in Kenya to establish Answer Africa. In the beginning, Craig and Dr. Makena handled all of the shipping themselves, turning their garage into a staging area for the early shipments. With a ten hour time difference between California and Kenya, they answered phone calls and e-mails at all hours.

One village at a time

To support and sustain continued efforts, Craig implemented a fundraising campaign where 100 percent of every donated dollar went directly to the purchase and delivery of the nets. Craig and Dr. Makena personally covered all of Answer Africa’s operating expenses.

“Craig is proof that one person really can make a difference given a good idea, the energy behind it and the conviction to see it through”, says Laurel Schuman, commercial sales specialist and Craig’s nominator at Rockwell Automation. “His generosity has touched an entire community in Africa and the countless number of people in Southern California who, having learned that malaria can be prevented, have come forward to help.”

VIEW ALL OUR ARTICLES